Last night’s Met Gala slayed on fashion and we are so excited to discuss some looks with you! But do you really know what is this event? Well, we decided to do this a little different and list everything you need to know about this gala that occurs every year! It’s like a Met Gala for dummies ahah

But, what is the met gala?

If you don’t know what this event is, then let me tell you that this is a ball organized by Anna Wintour, the editor-chef of Vogue!

The party happens on the Metropolitan Museum of Art in New York and it aims to raise Money for the Costume Institute Benefit, which is virtually the museum’s fashion department. Let’s not forget that every year the CBI makes an exhibition of looks in all editions of the event, with focus on the spring season.

If you want to get invited, you just need to be really important or just be friends with Anna because she’s the one that decides who goes and who won’t!

Every year there’s a theme and the famous marvelous looks are done by the best designers of the world! The clothes must be related to the theme of that year and this year, is based on the Susan Sontag ‘Notes on Camp’, which includes everything that’s extravagant, exaggerated and no-natural.

Now it’s the time to warn you that some looks can be pretty crazy and this year they took it to another level.

This year the Met Gala had three hosts: Lady Gaga, Harry Styles and Serena Williams! They are responsible for presenting the gala. Lady Gaga took this Job to another level when she arrived at the red carpet and changed her outfit 4 times in 16 minutes, all in the red carpet while the photographers were crazy taking photos! 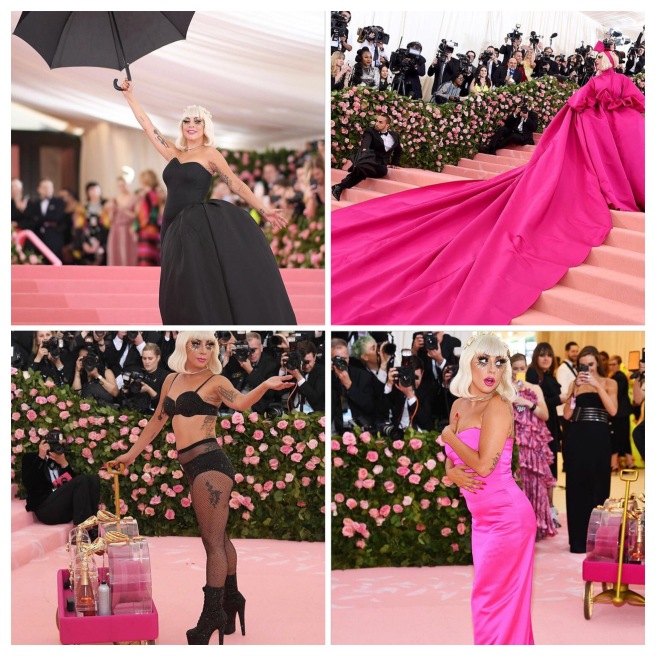 Like we said there were really crazy looks, don’t believe?

Jared Leto, in Gucci, decided to take literally his head as a pochette!

Enza Miller made us really dizzies in this Burberry costume with all those eyes! I dare you to look and don’t be dizzy!

Katy Perry’s dream was to be the on the Belle and the Monster, so she decided to dress up as a chandelier!

Michael Urie took the best of both worlds!

Florence (in Gucci) always wears dresses that make me divided. I like it. I don’t. I don’t know.

Cardi B (in Tom Browne) dress reminds me of the Rihanna Pizza dress. I’m waiting for the memes!

Zendaya in Tommy Hilfiger favorite Disney movie is Cinderella. Do you want proof?

Pink all the way…  The Barbie girl Kacey Musgrave in Moschino and Rachel Brosnahan in Erdem.

Both are not bad, nothing crazy but really pretty.

Katie Holmes (in Zac Posen), and her boyfriend (Jamie Fox) let the photographs take a picture of them together and just because of that she looked radiant!

Dakota Johnson, in Gucci, was so pretty and girlie. Nothing extravagant but pretty!

Irina Shayk has a killer body, we know! But this Burberry dress is too simple, she rocked it but still too simple.

Gwyneth Paltrow was a disappointment, we are always wowed with her looks but this year she took a very simple dress ( and put simply in it).

Both Julia Garner and Nina, in Zac Posen. Who was better? I like the Nina dress, is gorgeous because it’s different from the big dresses that we saw all night!

Ciara (in Peter Dundas), in this green dress, looked like a goddess.

Zoe Saldãna (Michael Kors) was very simple, but she looked so beautiful.

Which Kardashian was your favorite? Kylie and Kendal both in Versace looked like really glam muppets.

A blog where you can find everything that's about beauty! Whether you are looking for a review, tips or even a look then welcome to our blog! View all posts by Beautyworkers

This site uses Akismet to reduce spam. Learn how your comment data is processed.

Welcome to our blog!

We are two Portuguese Girls who met at University and found a common love for everything related to beauty. Don’t leave without talking to us!

What are you looking for?

New @zara reels! Some pieces from my last trip to Zara! Can you guess what I bought? (Codes in the comments)
A few pieces from my recent H&M shopping trip! Don’t forget the @hm sales already started!! #hm #hmwomen #hmsummer #hmsale #hmnewin #style #stylereels #beautybloggers
@zara + Body + Sale are the best combination! And today we have some recommendations for you! What’s your favorite? #zara #zarareel #zarahaul #zarawoman #zaradress #zaranewin #zarasale #zarasummer
Like we promissed, the new post about the @cocoandeve Sweet Repair Hair Mask is in the blog! 🌸 Click in the link that's in bio and find everything you need to know about this hair mask! ⠀
My vacations were full of mishaps, I forgot a few things, but luckily I took the new @cocoandeve Sweet Repair Hair Mask! For now I leave you a video of how to use this mask and later I promise to publish a photo that clearly shows all the advantages of this mask! Stay here because there will be a new post on the blog this afternoon (posted!).
Zara Mini Dresses! The sales are almost here and look how gorgeous these dresses are! What’s your favorite? #zara #zaraoutfit #zaradress #zarawoman #clothes #style