Being closed at home can be the perfect opportunity to see that romantic movie you’ve never seen or even to see again, without judgment! What you think?

For people that: are Nicholas Sparks fans and like to see movies with gorgeous men as the main characters. With Sparks, you’ll never know if it’s a happy ending or not (well, you do if you read the books).

A young man (Ryan Gosling) falls in love with a rich young woman (Rachel McAdams), giving her a sense of freedom, but they are separated because of social differences. The movie that won the ‘best kiss’, ‘best romance movie’ and started the romance between Rachel and Ryan. Don’t believe? See the MTV movie awards vídeo of ‘best kiss’. If we had a scale of romance in a movie this would be a ten although the ending could be a little happier!

A romantic drama about a soldier who falls for a conservative college student while he’s home on leave. They always chose gorgeous main characters and the one in this movie writes letters to the girl, how romantic! This time is Channing Tatum, a guy that doesn’t hurt the eyes at all. I have to say that I was expecting a different ending but well, it’s Nicholas Sparks…

A Marine travels to Louisiana after serving three tours in Iraq and searches for the unknown woman he believes was his good luck charm during the war. The main character (Zac Effron), again gorgeous man, finds a photograph in the middle of a war and falls in love with the girl…the rest you need to see.

A spirited Elizabeth Bennet meets single, rich, and proud Mr. Darcy. But Mr. Darcy reluctantly finds himself falling in love with a woman beneath his class. I absolutely love this movie, it has romance and it has the power to calm me down. It has romance, a strong leading woman (sometimes too strong) and Mr. Darcy is a dream in every way (well, in the end at least). The book has some scenes that were cut in the movie.

This is also a Jane Austen book, but this time it’s a comedy. Emma is a young woman from  1800s England, that meddles in the love lives of her friends. I also like the version from 1996 with Gwyneth Paltrow. You will have a good laugh and the ending is so lovely!

A lonely landscape architect falls for the spirit of the beautiful woman who used to live in his new apartment. I really like this movie. It has romance, a little bit of fantasy and it will make you laugh (the scene where the guy takes mediums to his house…or when the girl enters to the guy’s body) Overall, you will not be mad when it ends, on the contrary, you’ll be very happy. Promise!

For people that like: a good laugh! And a good dose of romance!

Who doesn’t like this movie? Benjamin Barry is an advertising executive and ladies’ man who, to win a big campaign, bets that he can make a woman fall in love with him in 10 days. Andie Anderson covers the “How To” beat for “Composure” magazine and is assigned to write an article on “How to Lose a Guy in 10 days”. They meet in a bar shortly after the bet is made. I love it when she calls him Benny Bo Bo and who can forget the scene when they sing the song You’re So Vain! If you never saw it, don’t miss one more minute!

Another movie that I love. Anna Brady (Amy Adams) plans to travel to Dublin, Ireland to propose marriage to her boyfriend Jeremy on Leap Day, because, according to Irish tradition, a man who receives a marriage proposal on a leap day must accept it. Then she meets a Declan (Mattew Goode) that will help her. Of course, they fall in love and it’s so romantic but also a movie that will give you a lot of laughs! I really like to watch this movie when I need something that I know will leave me calm and happy!

A pushy boss (Sandra Bullock) forces her young assistant (Ryan Reynolds) to marry her in order to keep her visa status in the U.S. and avoid deportation to Canada. Both actors are so funny and if I had to choose a scene I would not know, I like Ramone’s dancing in the bachelorette party, Grandma Annie and Margaret dancing around the fire… Watch it, you’ll laugh a lot! 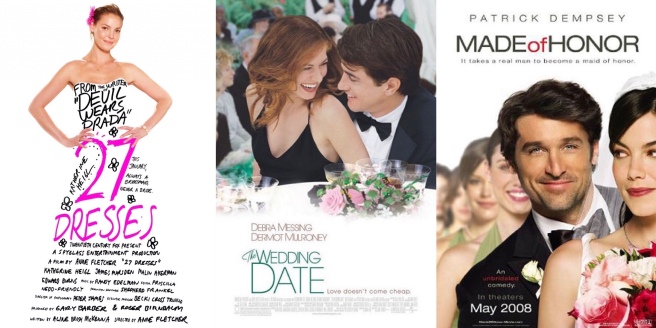 After serving as a bridesmaid 27 times, a young woman (Katherine Heigl) wrestles with the idea of standing by her sister’s side as her sibling marries the man she’s secretly in love with. Then she meets a journalist that wants to write about her. A light comedy/romance movie that it’s perfect for a weekend movie night!

Again, one of my favorite movies. Single-girl anxiety causes Kat Ellis (Debra Messing) to hire a male escort (Dermot Mulroney) to pose as her boyfriend at her sister’s wedding. Her plan, an attempt to dupe her ex-fiancé, who dumped her a couple years prior, proves to be her undoing. This is a really good romantic movie and reminds me that it’s time for me to go and watch it again. oh and almost forgot that the soundtrack is from Michael Buble (I think I don’t need to say more).

This movie is from the time every woman was crazy about doctor Dereck Shepherd and his blue eyes. A guy in love with an engaged woman tries to win her over after she asks him to be her maid of honor. You will laugh and be crazy with some things they say and do but I can assure you the ending couldn’t be happier.

For people that like: strong but also vulnerable leading women!

A movie about how dangerous a wish can be.  A girl makes a wish on her thirteenth birthday and wakes up the next day as a thirty-year-old woman. A light and funny movie to watch.

If you want a movie about a strong and independent woman this is for you. A young woman who’s reinvented herself as a New York City socialite must return home to Alabama to obtain a divorce from her husband, after seven years of separation. Romantic, funny and great to watch or re-watch.

Let’s travel to a romantic Italy through the letters of Juliet and find our enchanted prince. If this is your dream, then this is the movie for you. Sophie (Amanda Seyfried) dreams of becoming a writer and travels to Verona, Italy where she meets the “Secretaries of Juliet”. Everything complicates when Sophie responds to an old letter and the letter’s owner along with her grandson arrive to talk to her. Together, they go try to find the ‘Romeo’.

For people that like: to see movies without kids around!

I think this the classic, sexy and sassy romantic movie that everyone already saw. No need for introductions. A man in a legal but hurtful business (Richard Gere) needs an escort for some social events and hires a beautiful prostitute (Julia Roberts) he meets… only to fall in love. Did you know that Julia, Richard and Gary Marshall (the movie director) made a pact to never make a Pretty woman 2 if one of them didn’t want? And that the three of them got together again for the movie Runaway Bride?

A funny and romantic movie shows you that when you don’t want to fall in love, sometimes destiny can trick you. The actors are both sexy and stunning so nothing wrong with the movie. A young man (Justin Timberlake) and woman (Mila Kunis) decide to take their friendship to the next level without becoming a couple but soon discover that adding sex only leads to complications.

If Pretty Woman is the classic, this the sexiest and sassy novelty. How hot is this movie? Literature student, Anastasia Steele’s (Dakota Johnson) life changes forever when she meets handsome, yet tormented, billionaire Christian Grey (Jamie Dornan). Did you know that Charlie Hunnam was tapped to play Christian Grey? He was cast in the role in 2013 but had to drop out of the project due to scheduling conflicts.

For people that like: romantic movies that will definitely make you cry! Me before you and the time traveler’s wife are also available in books.

The classic. A seventeen-year-old aristocrat (Kate Winslet) falls in love with a kind but poor artist (Leonardo DiCaprio) aboard the luxurious, ill-fated R.M.S. Titanic.

A so sad but romantic story. Sometimes love can’t save everything. A girl in a small town (Emilia Clarke) forms an unlikely bond with a recently-paralyzed man (sam Claflin) she’s taking care of.

A Chicago librarian has a gene that causes him to involuntarily time travel, creating complications in his marriage. It’s a great love story but the ending is sad, sorry.

A blog where you can find everything that's about beauty! Whether you are looking for a review, tips or even a look then welcome to our blog! View all posts by Beautyworkers

One thought on “Things to do at home: Romantic movies to see”

This site uses Akismet to reduce spam. Learn how your comment data is processed.

Welcome to our blog!

We are two Portuguese Girls who met at University and found a common love for everything related to beauty. Don’t leave without talking to us!

What are you looking for?

💫 New Post! @balibody Tanning oils!
⁣Are you ready for Summer? We are! But this means separating the winter clothes and bringing back the summer clothes. This is the perfect time to realize what pieces we should keep and which ones we should let go of!
New blog post 🆕 “How to style 3 neutral dresses from @zara “ in collaboration with @michelegoesglossy
⁣If you are planning a trip to Lisbon and are a Brunch lover like us, this post is for you.⠀
Fake Tan can be a very complicated and messy process when all we want is a flawless and natural looking effect. That's not always possible but @balibody came to the rescue! They came out with the perfect products that allows you to make this process easy and fast!⠀
⁣The Spring 2022 shoe trends keep toes concealed, heels high, and ankles harnessed! But the prices are not always what we can spend, after all we only have two kidneys and we like to keep them in place, right?⠀